I had been asking around for news of Taklung Rinpoche. He was one of the highest lamas of the dzogchen tradition. He was highly praised in The Yogins of Ladakh book, his name being spelled ‘Staglung’. A tulku, ie. he consciously reincarnated himself, he always returned with a withered right arm. Various rumours had circled around about his whereabouts and ill health. Someone said they might have news of him at a monastery near Leh, a place called Karnarlung Gompa in Choglamsar.

When I arrive they tell me that he is actually there that day! Great good fortune. He is indeed ill and was resting. We had to wait for an interpreter anyway and so another long wait ensued. There then followed two or three hours of loitering on a terrace being sort of grilled about who I was, why I was there, what did I want with Rimpoche, what was my practice and so on.

At last everything is ready and we go in to a dark shrine room. Rinpoche is sitting on a raised dais, there is incense and thangkas hanging. It is all very impressive. He asks me a few questions, more grilling, and I produce John’s book. There is a section in it on him, a picture too, but he didn’t react at all when he leafed through it. My credentials established we got into a proper Dharma conversation. I was looking for the right way to practice given my own ill health and issues. The trauma from the accident had turned me into a very pale shadow of my former self. He wanted to know all about the accident and gave me some pretty general advice.

He asked for my mala beads and did something with them, I couldn’t see what, for around five minutes or so. He eventually looked up with the most enormous grin I think I’ve ever seen! It was as though the sun had suddenly come out in that darkened room. He was very happy and told me that everything was going to be alright, that I was already going in the right direction and that all I had to do was keep going.

He asked me “what will you do back in your country? I replied “I hope to find a way to help the Dharma”. He says “I hope so too!” That was clearly the end of the session and so making the ritual prostrations, we left. On the way out the interpreter, Paljor, said “do you know what Rimpoche has done for you?” I said “not really, what?”. He told me that the business with the mala was a super-special-secret divination thing. He said that he had “looked into my mind-stream and had seen my future”. The fact that he was so happy about it was very good indeed! Apparently a very rare and special privilege had been granted me and I felt awestruck because of it. The take away advice he gave was that one’s practice should be continuous and you should not force it. 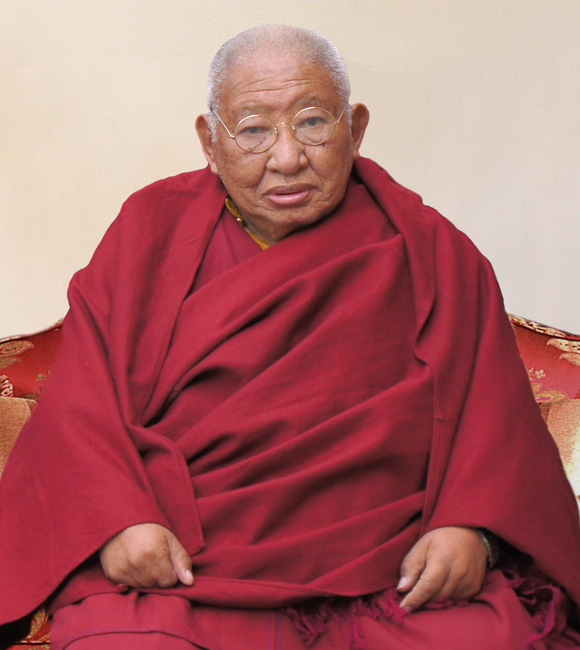 << back Ayu Lhamo next Gotsang Gompa >>
scroll to top