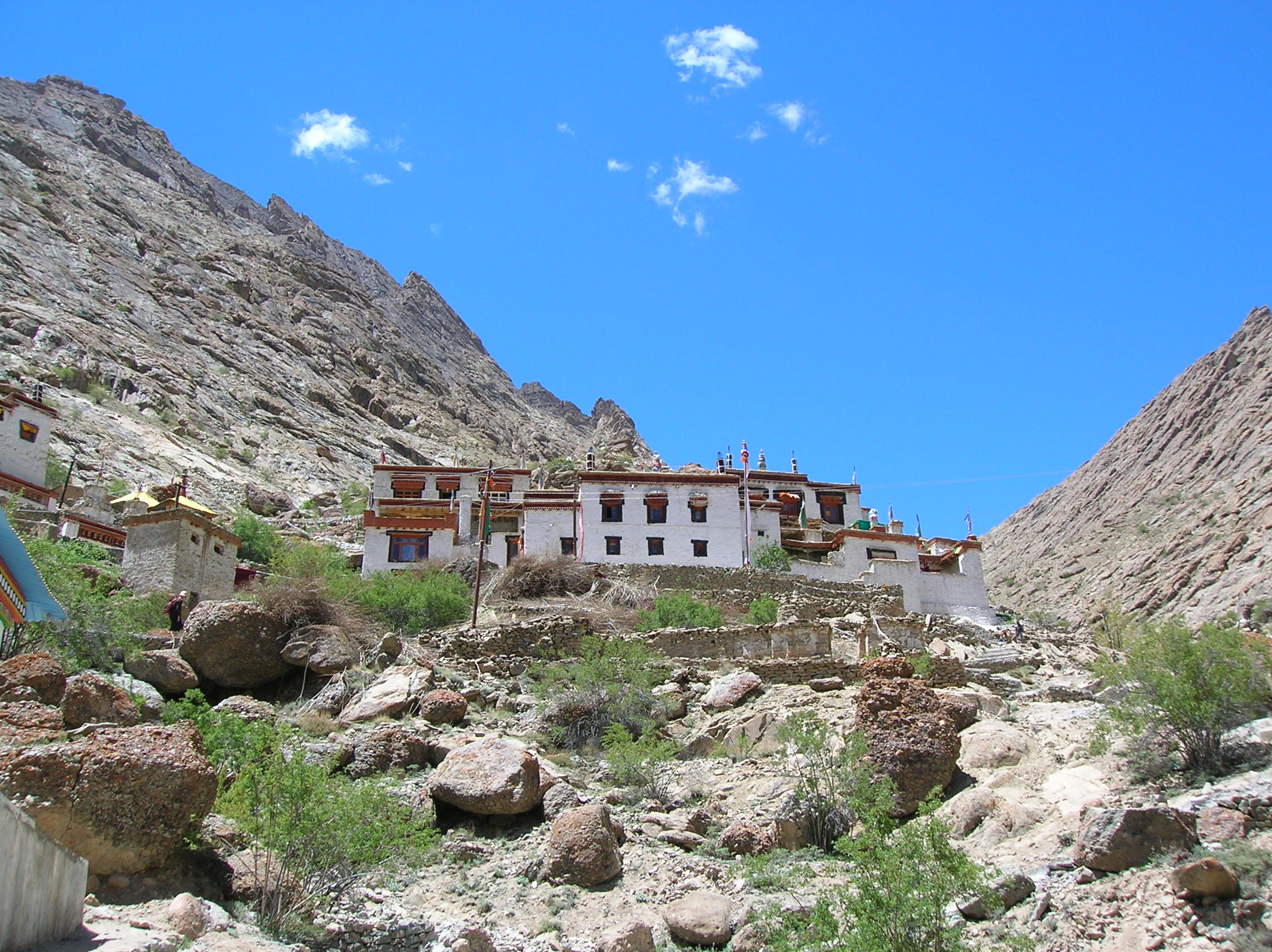 Ayu Lhamo had asked me to get a “khuntup” whatever that was. I decided to ask for one when visiting Gotsang which had been one of the places in John’s book. The bus from Leh left me at the side of the road where I could see away in the distance Hemis Gompa. This is one of the main tourist attractions and an important monastery. Up behind it, somewhere in the mountains was Gotsang where a famous monk from the middle-ages, Gotsangpa, had practiced.

Some passing locals had told me that there was a bus coming that would go to Hemis so I loitered around. When I got on an important looking monk invited me to sit next to him on the crowded bus, hudging over to make room. He didn’t have much English and I could only say a few words in Ladakhi so the conversation was a bit sparse. He noticed I was wearing mala beads and asked if I was a meditator. I put my hands in the zazen posture and mimed not doing anything – the easiest mime that there is! He said that I should stay in the monastery with them rather than find a guest house.

When the bus arrived he sprang up and produced a big bunch of keys and started throwing out instructions to lots of younger monks who beetled off to do his bidding. Two of them picked up my bag and asked me to follow them. We got to a room that looked like someone was staying there already. I had become very tired on the journey and wasn’t really thinking straight. If I had’ve been, I would have worked out that this was the senior monk’s own room! The penny dropped the next morning. I felt pretty embarrassed!

Next day I set out for Gotsang. It was madness really since the ME symptoms were pretty bad and digestive rioting had eroded my sleep. I would climb the steep trail and rest by turns. It became a bit of an epic and after several hours I was resting more than I was walking. At last I made it to the little white gompa in the Himalayas. Producing John’s book to show them had an amazing effect. They saw a picture of Shakyashri on the cover and went bananas, taking turns to hold the book on their heads and pogo up and down! I couldn’t believe my eyes.

When they calmed down they ushered me inside to where an English speaking monk was working at printing sacred texts. Tea was brought and people crowded around. After a wee magic show people left us to talk. While I explained about John, the book and everything he calmly kept printing from a woodcut. There was a smudge so he couldn’t use that piece and had to throw it away. He gave it to me to look at. By this time I had learned some of the Tibetan alphabet and tried to sound out a few words. Even if I got it right I didn’t understand what they meant! After I got through a few words he joined in and whizzed through a few lines in that deep-voiced Tibetan chant that they do. I realised that he wasn’t looking at the text and when he finished I asked him if he had memorised it. “Of course, we all have” he said gesturing not at the scrap of paper I was holding but at the entire wall of the room which held a bookcase containing what looked like thousands of wood-block printed books. They get together periodically to chant the whole thing. It is just expected that as part of their training they memorise the whole of the Tangyur and Kangyur.

Deeply impressed we went on to talk about the khuntup that Ayo Lhamo had mentioned. He said “follow me” and took me on a tour of the place. There was one room in which I felt an enormously powerful atmosphere. There was a mat with some clothes propped up in a little pyramid. He explained that it was where a recently deceased lama had spent twelve years in meditation! There were goosebumps and tingles as my mind played tricks on me, perhaps I hadn’t yet recovered from the walk up to the place, but oh my Lord it was a funny feeling. Down and down windy stairs we went until he started burrowing in an ancient alter. I think we must have been way underground by that point. He produced a little square of folded paper with inked designs, stitching and wax on it. He told me that it was a “khuntup”, that it would bring me good luck and protection. I should wrap it in blue cloth, keep it with me and not let it get wet.

It is in my wallet still!

<< back Taklung Rinpoche next Lamayuru >>
scroll to top