There is a summer palace near Leh where the Dalai Lama visits most years. He has ten days in retreat and everyone waits for him to come out and do three days of teaching. Monks and nuns from all over Ladakh along with pretty much everyone else comes to see him. The non-Ladakhis are kept in a separate enclosure for some reason. There is a sign on the way into the roped off area saying “Tourist”. 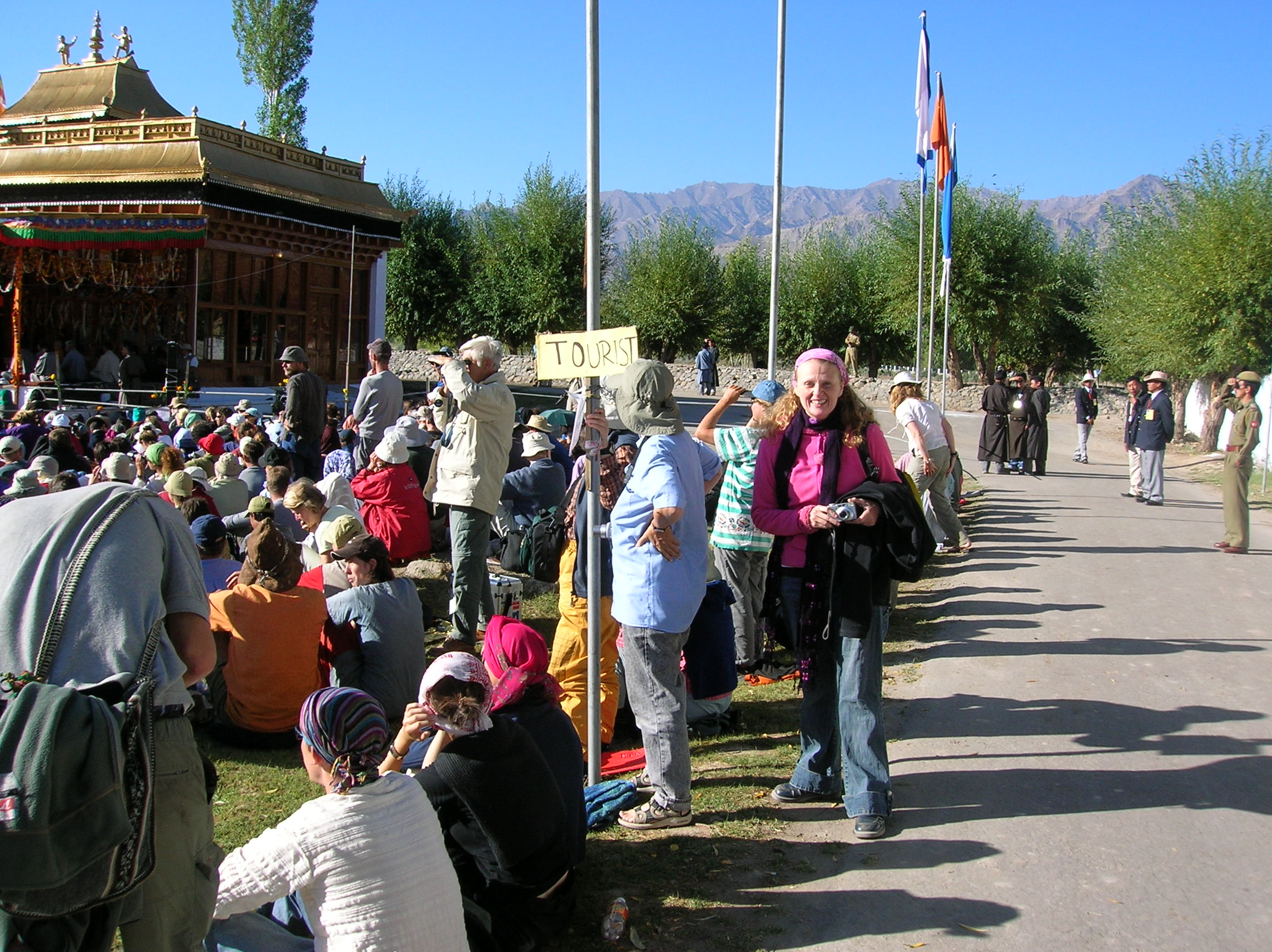 The sun is super hot and there is no shade. My chum Nichole and I entertain each other with foolishness and flippant remarks for what seems like hours when at last there is a beating of drums and a playing of pipes. Everyone stands and there in the distance we see a yellow umbrella in the centre of a press of people approaching. When they get close enough and I get a line of sight through the crowd, I clap eyes on him and suddenly find myself really moved.

There then follows three days of really intense, technical teachings and empowerments and so forth. Amongst the teachings that I found useful where when he said that “looking for a single cause for suffering multiplies it, studying the dependent origination of that suffering will lessen it.” He said that strong emotions, both positive and negative, help increase the sense that things are ‘real’ in a separate, self-existing way, what is known as ‘reification’. Human intelligence is flawed and distorted by the belief in a self-existing subject. Understanding of ‘selflessness’ or ‘anatta’ together with a great compassion for all sentient beings form the basis of developing ‘Bodhicitta’, the wish for enlightenment or the ‘awakening mind’.

Towards the front of the crowd is another enclosure full of seated monks who are there to do the chanting. I notice Dupon Samten Rimpoche and some other of the Lamayuru monks amongst them. I get out my little camera to take a shot of him. Much to my surprise, just as I take the shot, he turns round and looks right at me. It felt really spooky for a second that he seemed to know what was happening.

There was a security guy keeping watch over everything. A young Tibetan in a suit and tie, earpiece and sharp hair cut. He stayed standing throughout while we sat and suffered under the sun. He never wavered for a moment, not that I saw. I was astonished at his endurance and undistracted attention maintained for hours and hours.

At the end of the three days I sat under a tree on the way out and had a little picnic as the crowds, some three thousand people, streamed out. A tiny, ancient nun came and sat with me, Nawang Jongdon from Lingshed monastery. I give her food. A local comes over to see what is going on, suspicious. He is concerned for her safety and thinks we might be teasing her or something. A crowd forms. We establish that we mean her no harm. She seems quite disorientated but grins a lot. I ask her where she is going and she replies “shekitpo rak” - “I am happy”. She takes a shine to me and beams all the time. She replies to the local’s questions with “I am going to America with him, he is happy and beautiful!” We finish eating and being grinned at and then she’s off. She had to be around ninety years old, something like four foot high, and had a strong sense of Yoda about her! 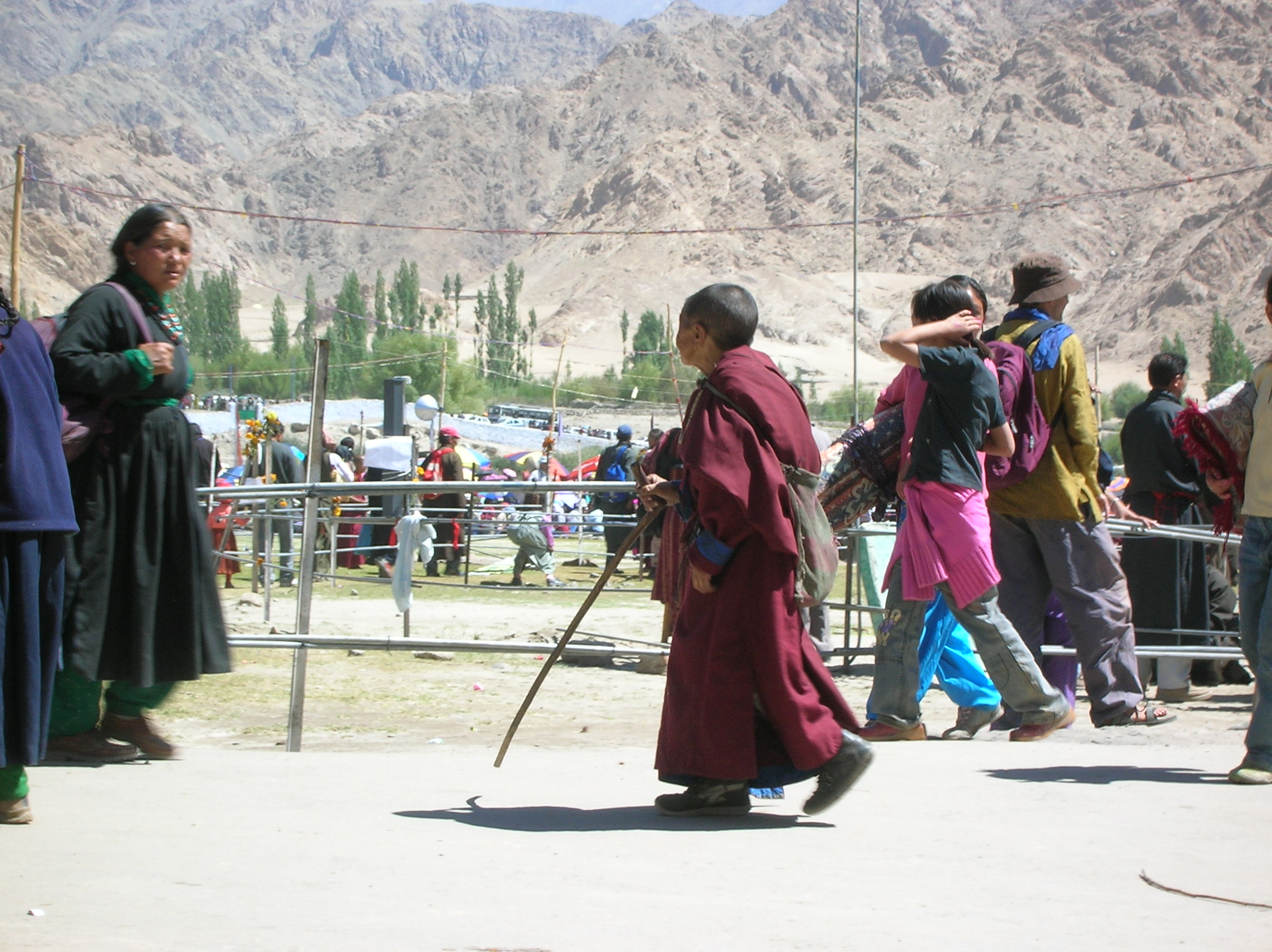 We get to a bus in a throng of people. A farmer lady uses her elbows and feet to force her way through the crowd towards the door. She hits Nichole with her prayer wheel to get her out of the way and dives in between us. She happens to be immediately behind me as I go up the stairs. A guy in front of me is wearing a bulky rucksack and when he gets to the top of the stairs he suddenly turns in such a way to knock me backwards. The lady is right behind me and prevents me from stepping back so I have to make a grab for the vertical hand rails as I fall. I manage to hang on and as I dangle at about forty five degrees above her she starts to jab her mani wheel into my behind to get me to move as though I’m a goat or something. I can’t move up or down and nor can I let go to stop her cattle prodding me. This goes on for a while until the guy in front moves enough for me to pull myself up and away from the ‘assault with a Dharma weapon’. With a bruised bum I stand all the way back to Leh.

<< back Mareike next South >>
scroll to top