The season was nearly over and everyone visiting Ladakh was leaving before the snows blocked the roads. I got a ticket for the second to last bus to Manali. The road goes some three hundred miles to Manali, over the Himalayas and crosses the Rhotang Pass. It is one of the highest and most dangerous roads in the world!

The travellers gathered in the early hours of the morning but the bus driver did not appear. We listened to a very sleepy muezzin give the call to prayer really badly, which made everyone laugh. After discussions someone claimed to know where the driver lived and they went off to see what was happening. At long last they returned, the driver had simply been asleep, and off we went.

At one toilet stop I did some magic for the locals and got an odd reaction. The Indian family’s eyes went like saucers and they looked really frightened. I realised that they might be thinking the effects were actually supernatural. For a delicious few minutes I toyed with the idea of building on the incredible status they had assumed for me but quickly decided that it was the road to darkness. I let them in on a few secrets to diffuse their tension and eventually got them laughing and messing about. Again, it was shocking to meet this belief in things supernatural in such a direct and personal way.

We reach the Rhotang pass without too much trouble. The road is pretty terrible in parts. Looking out of the window I see what looks like straight down, hundreds of metres. We see the remains of trucks and buses smashed to smithereens below us. Everyone tightens up. Folks at the back of the bus, behind the rear axle, are being thrown around. One guy gets a bad hit to the head from the roof! 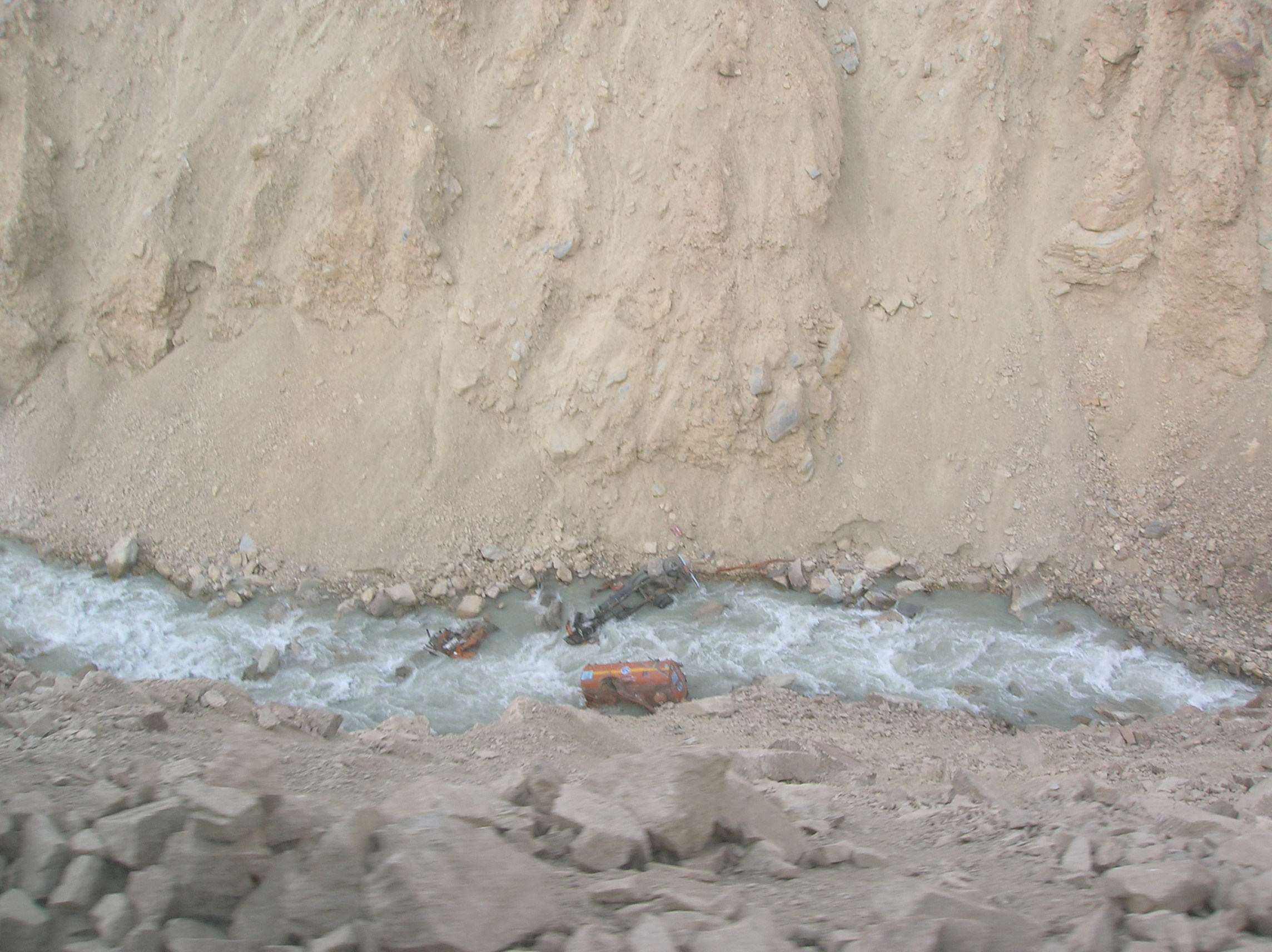 A vast plain opens out before us with a little smudge of dust being raised. As we cover the miles the smudge gradually grows and after a while I see it is actually a single person walking with hundreds of goats. When I realise what I’m looking at my mind suddenly has a point of reference and reels at taking in the scale of the place. It is awe-inspiring. 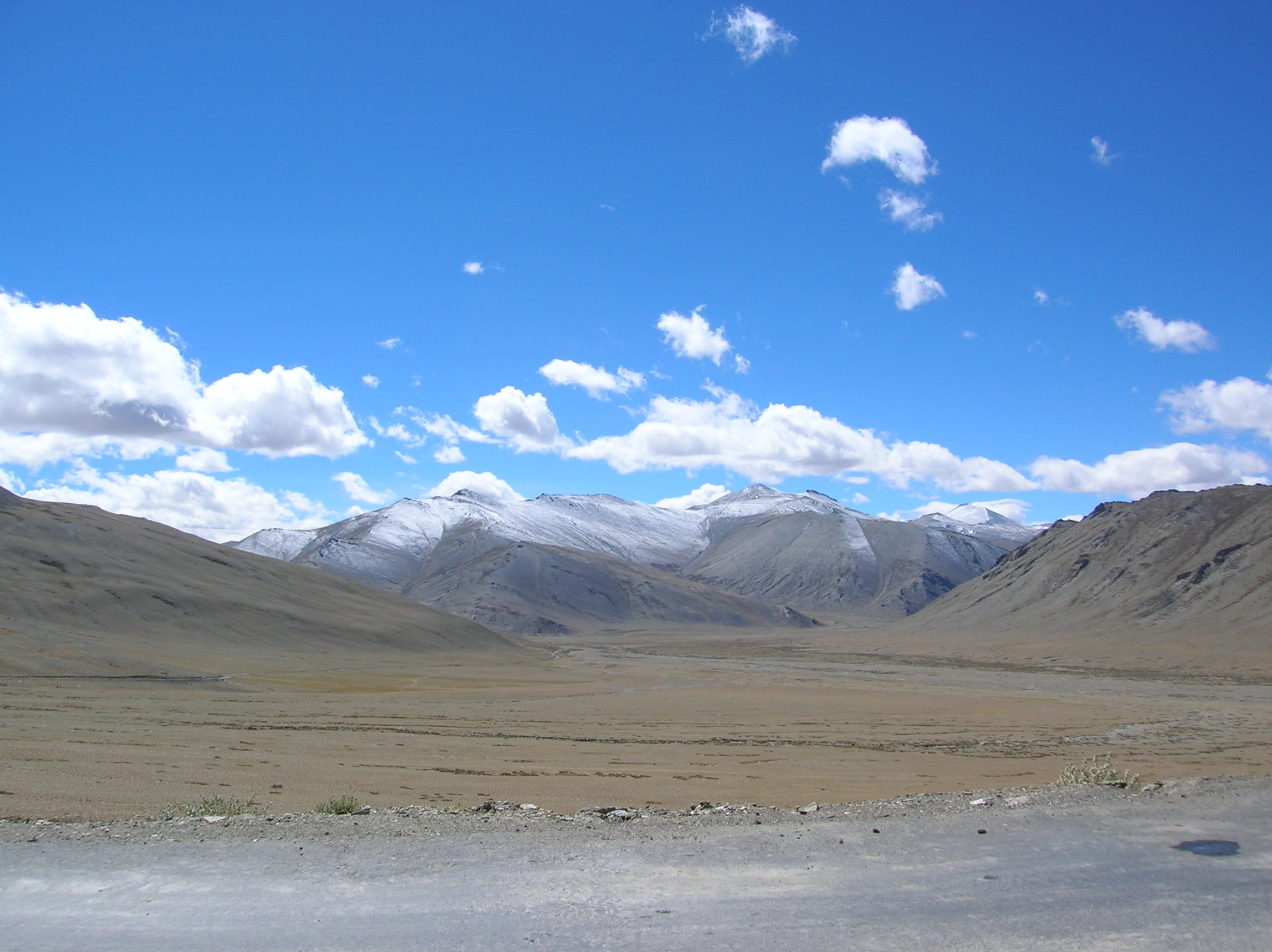 We bounce over the Himilayas all that day and then are left at a little group of houses. The bus driver lets us in to a cafe sort of a place but there is no-one there and nothing to eat. It is really late and dark and everyone is tired and feeling beaten up by the journey. There’s nothing for it but to try and get some rest.

Everyone makes a nest as best they can and we all fall a sleep in basically a big heap of strangers. At first light we are roused and are hustled back on to the bus. It goes only a short way and leaves us on the side of a gorge where the road bridge has fallen down. It takes a while to realise what is happening which is that there are wires strung over the chasm. A furious torrent explodes out of the high mountains and thunders away to our right. A new bridge is partly constructed and its girders sit on wooden blocks. It is maybe ten metres above the waters.

To my horror I spot people crossing it, one carrying a sheep on his back! They climb on the wet girders high above the rushing waters. It makes me feel queezy. We join a queue. At first I’m not sure what it is for but there’s nothing else to do apart from attempt to climb it like those nutters up there. Wires have been strung across the river and a group of three guys on either end are pulling a metal cage across. A person and their bags is loaded in and then hauled over. 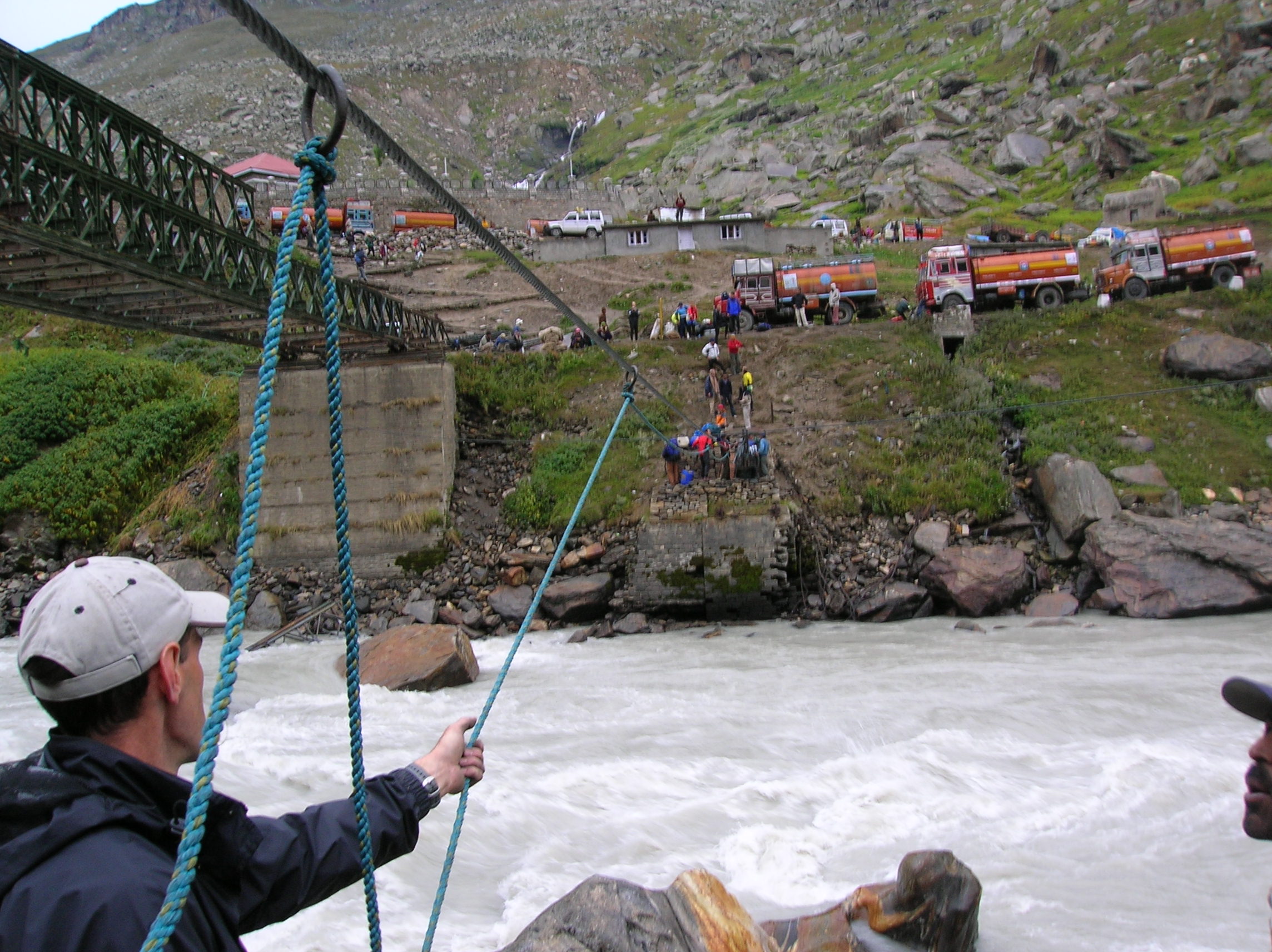 When it is my turn I have a feeling of deep surrender as the anxiety reaches its peak mid-stream. It seems that there has been some release of the past as I symbolically “cross the Rubicon”.

When we have all got across we then wonder how our journey is going to continue. We ask around and various negotiations take place which eventually results in a few big taxi vans being hired. Later that day when we approach Manali we pass a sign that says “Inconvenience regretted”. Our van load became hysterical with laughter at that one.

A foot note to that journey was that we met up with the folks who had come on the last bus, the one after us. The driver had apparently kept falling asleep at the wheel with the huge drops next to the collapsing road. The passengers mutineed because the driver would not stop or let anyone else drive. They counted to three and grabbed him out of the driver’s seat while someone pulled the handbrake. An Australian volunteered to give it a go and managed to get everyone to the downed bridge safely!

I really hope to return to Ladakh one day.

(a collection of poems from this pilgrimage)

<< back HH the Dalai Lama
scroll to top