In learning to fly a quad-kite pattern we usually use terminology like ‘clockwise 360’ or ‘anti-clockwise 180’ (‘counter-clockwise’ in American English). Using the number of degrees gets confusing when the rotation is more than 360 sometimes. Another problem is keeping track of the twisting of the lines. It’s good to know.

We could use .5 to express the half-way points too, like North East is .5. For example a ‘+2.5’ turn starting from a straight up hover would turn the kite clockwise to point down and left in the South West position.

Some benefits of a system like this is that it is easier to understand than say ‘CCW 630’, less ambiguous and you can keep a running total of the twisting of the lines.

Consider this clip, the start of the M10 pattern in Club38 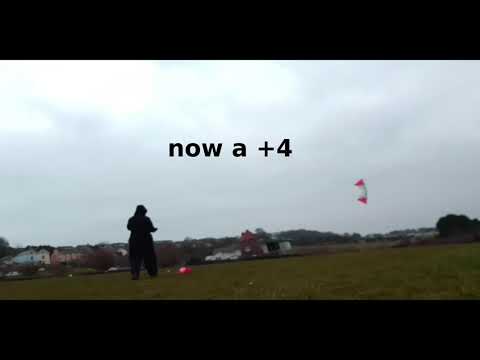 If you are creating a pattern this way then the maths to work out what to do to clear the lines becomes pretty easy. This example has a total of +8 and -9 leaving us with -1 ie. a quarter turn to the left.

<< back fleet next club38 submissions >>
scroll to top